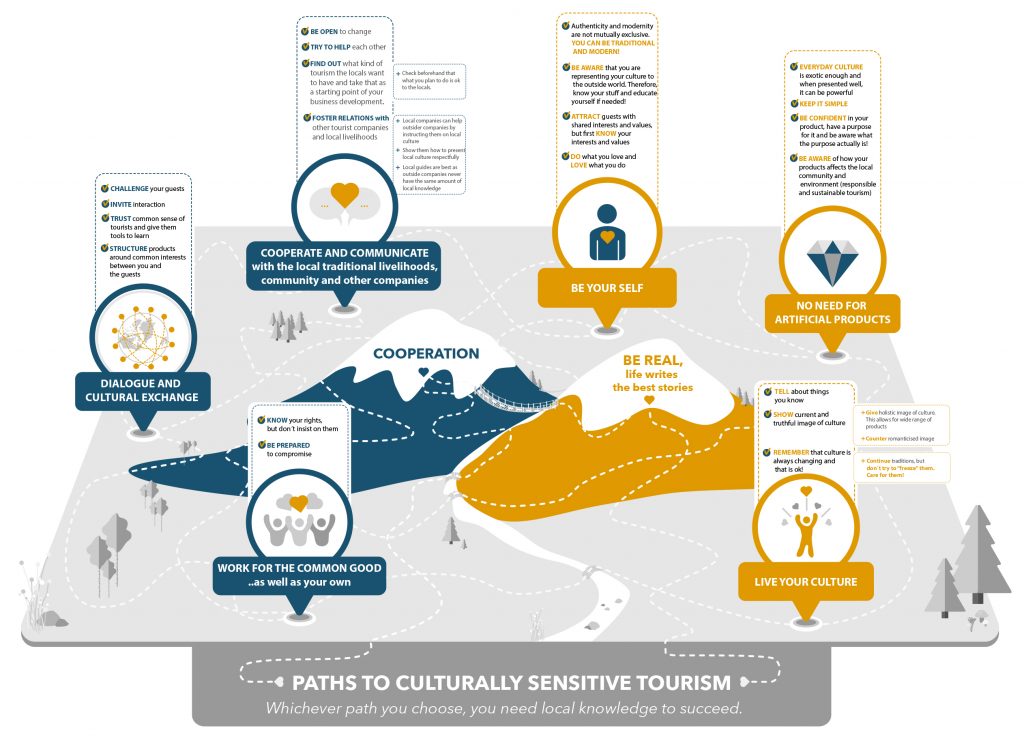 Until lately, cultural sensitivity has been a little-used concept in tourism research and development although it is highly relevant in tourism settings where different cultures meet, collaborate and live together. It is needed for both hosts and guests and enhances the well-being of both. Here it is discussed from the point of view of tourism entrepreneurs who want to actively incorporate respect for local cultures in their business activities.

A culturally sensitive person recognizes that cultures are different and respects these differences. For example, in Finland, there are three indigenous Sámi cultures, North Sámi, Inari Sámi and Skolt Sámi, and in Sweden, Norway and Russia, there are even more Sámi cultures. A culturally sensitive person understands that there are differences between these cultural groups and takes them into account in everything she or he does concerning the Sámi.

Stereotypes are an example of not recognizing and respecting cultural differences, making them an example of cultural insensitivity. For example, indigenous peoples are often marketed to tourists as primitive peoples living outside modernity and wearing colourful costumes – and tourists often expect to see this. On the other hand, there are tourists who do not want to see stereotypical images of local cultures. They want to have their stereotypes challenged and get to know the local cultures in other ways. They are an ideal target group for culturally sensitive tourism companies who want to break down stereotypical images of local cultures in their products and marketing communication.

Recognition of and respect for local worldviews, cultural values, beliefs and traditions are a vital aspect of culturally sensitive tourism. Local livelihoods and the use of local land and water are examples of issues that are often important to local people. They are part of the local culture. Cultural sensitivity means that, in tourism product development, the local culture and nature are not only resources but also something to which the products have to be adjusted. A culturally sensitive person cares about local people, their lives and their cultures. To respect local cultures is also to be interested in them and willing to learn more about them.

Culturally sensitive tourism should result in mutual understanding and cultural exchange, which help to promote equity within partnerships or relationships as well as to create shared values and benefits for all parties. It is an important constituent of culturally sustainable tourism.

Interested to learn more? Check the free self-study online course on cultural sensitivity in Arctic tourism and the website of the ARCTISEN project (Culturally sensitive tourism in the Arctic). You are also welcome to join the free webinar ‘Exploring the meanings and practices of cultural sensitivity in tourism’ which will take place next 29 April at 14-16 UTC (15-17 CET). Registration here: Meeting Registration – Zoom