#3 Pernik, in central-western Bulgaria, is a post-industrial town facing issues of rapid depopulation due to unemployment and lack of opportunities. Despite not being a famous tourist destination, Pernik is well-known for the International Festival of Masquerade Games, the most important event in the region. It takes place every year on the last weekend of January. Nowadays, more than 100 groups from Bulgaria and other countries, with more than 6000 (up to 9000) masked performers take part in the Festival, while national and foreign media actively cover the events. Each edition attracts approximately 250,000-300,000 visitors. It lasts three days and its core attraction consists of the parade of masquerade groups along the roads of the city centre which, ultimately, culminates in the main square where the stage is set up. Today, the Festival can be considered an umbrella intervention, encompassing both cultural tourism interventions and interventions that, instead, mainly target the local community. For instance, during the month of January, museums, art galleries, and cultural community centres usually put on exhibitions related to the Surova tradition. Here, the local community has an essential and active role in the organization of the Festival-related events and takes action voluntarily to support the organization. Local businesses are also involved. Some of them are willing to make financial donations and give their support to strengthen the event and cooperate in its development. In addition, since 2015, the NGO “Local Heritage” has been working in the field of heritage conservation with the aim to support the Festival through communication and dissemination activities. For instance, in 2019, the same association organized workshops to make traditional Survakari masks and created an interactive website to present the masquerade tradition and the Survakari identity. Of course, the overall intervention had a huge impact on the territory. The arrival of approximately 300,000 visitors generates a positive economic impact and, at the same time, enhances socialization among people from different social, professional, and age groups, strengthening social cohesion. In particular, the Festival offers the opportunity to become more acquainted with the cultural specificities of different regions, contributing to intercultural dialogue. There might also be, to some extent, an impact on socio-demographic trends, due to the increasing number of foreigners settling down in the villages around Pernik, attracted by the Festival and the local cultural heritage. Finally, although the Festival has to improve its strategic vision to preserve the sustainability of the entire event, the constant passion, commitment, and resources invested by local administrative entities and cultural institutions have been decisive for the socio-economic benefits generated by the Festival. Their actions have certainly been inspired by the peculiar participatory approach that allows for a continuous flow of inputs from the local community. 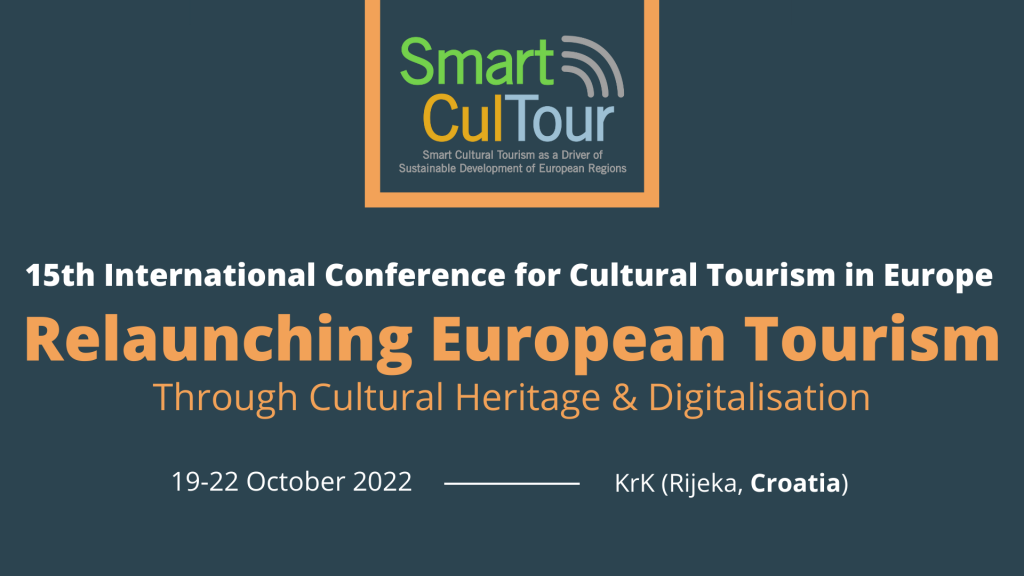 From 19 to 22 October 2022, SmartCulTour will present and be a key protagonist of the 15th Conference for Cultural Tourism in Europe. The event will be held in Krk, Croatia, on the Adriatic Sea. The annual theme chosen by the ECT Network is about the relaunch of European Tourism through “Cultural Heritage” and the opportunities offered by the technological advancements of “Digitalisation”. Indeed, SmartCulTour’s findings and studies strongly believe that heritage and culture, as drivers for sustainable tourism, can work side by side in a complementary relationship with innovation, digitalisation, creativity, and tourism product development. The European Cultural Tourism Network “ECTN”, as well as SmartCulTour people, is willing to disseminate and improve sustainable cultural tourism by sharing experiences and encountering different European supporting practices. Finally, at the end of the Conference, the ECTN will award the Prize for “Destination of Sustainable Cultural Tourism 2022”, a special occasion to discover new experiences, research, and practices about tourism.

Within the work package (WP) 4, several tasks dedicated to the fulfilment of this objective have been outlined. This report reflects on Task 4.1. Identification of the indicators related to the basic concepts defined in WP2.

To deliver our conclusions, a systematic review of relevant literature, related to the concepts of sustainability, resilience and cultural tourism has been conducted. Particular reference was paid to the indicators most often used to measure these concepts. Additionally, the Report contains a review of the Tourism Area Life Cycle (TALC) – related literature. The conclusions of the TALC analysis will have an important role in the delivery of further tasks within this WP. With regard to each analysed concept, a proposal of the prospective methodology to be used in the Deliverable D4.2 is given, with the aim to create Sustainability-Resilience-TALC framework for cultural tourism destinations.

The report contains four sections, including the introduction; the methodology section – outlining the process of systematic review; the analysis section – delivering the overview of indicators related to fundamental concepts and guidelines for the selection of relevant indicators, including the conclusion after each part of the analysis, pointing out main findings; and reference section. At the end of the report there is also an Annex containing tables with elaborated sources of literature retained after primary selection based on relevant data bases
You can read the full Deliverable here: Deliverable D4.1

Sustainable cultural tourism can be achieved through democratic participatory planning processes which are context specific. A key challenge for peripheral European regions lies in crafting well designed cultural tourism programmes which will meet the needs of the residents and tourists while preserving regions’ fragile cultural assets. Thus, it is important to frame cultural tourism within a larger socio-cultural, environmental and economic debate, ensuring a more equitable development.

In this context, a report has just been submitted by SmartCulTour partner Modul University Vienna (Austria) presenting a first review of the key cultural tourism concepts and trends which will help to identify a set of sustainability and resilience indicators. These indicators will be a useful tool for stakeholders so that they can plan, monitor and evaluate sustainable cultural tourism developments.

Much of the data that is currently used to measure impacts of tourism is highly fragmented and/or incomplete, with unclear and/or different definitions for key concepts. Furthermore, there is a lack of data on excursionists, on new formats of accommodation, on transportation and accessibility, etc. WP4 will first explore how to optimally use existing data and data collection methods, and supplement these with new (qualitative and quantitative) methods, thereby making use of recent ICT developments (big data, smart cities).

WP4 is lead by the Faculty of Economics, Business and Tourism (FEBTS) of the University of Split (Croatia) with the contribution of KU Leuven (Belgium), Ca’Foscari Università di Venezia (Italy), UNESCO and MODUL University in Vienna (Austria).

A special issue of Sustainability (ISSN 2071-1050) within the section «Sustainability of Culture and Heritage» has been set up as a collaboration between SmartCulTour, IMPACTOUR, SPOT and RURITAGE H2020 Projects.

Within the framework of Europe’s Smart Specialization Strategies, it is important to identify to which extent and under which considerations a cultural heritage strategy can support an effective and sustainable regional development. Focusing specifically on European regions, this Special Issue gives particular relevance to the development of robust measurement frameworks on the sustainability and resilience of cultural heritage (tourism) destinations, past and future trends in transformative cultural tourism, successful interventions in cultural heritage management, and community-based management and planning.

Cultural heritage holds many tangible and intangible values for local communities and society in general. Particularly from a socioeconomic perspective, the presence of cultural heritage resources might serve to improve regional development through cultural tourism, event organization, the attraction of creative industries and other businesses, etc. However, notwithstanding the relative abundance of cultural heritage resources—in varying degrees of scope—there are substantial differences in the current application of culture-led development strategies across European regions.

Manuscripts can be submitted until 15 January 2021 here: www.mdpi.com by registering and logging in to this website. Once you are registered, click here to go to the submission form.