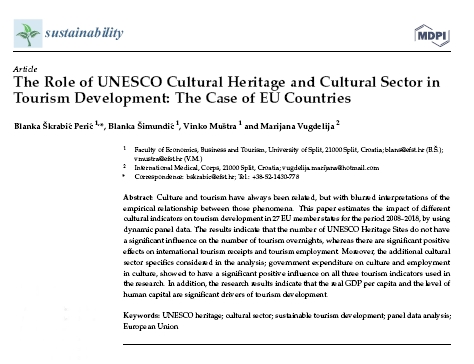 Blanka Škrabic Peric, Blanka Šimundic, Vinko Muštra (University of Split, Croatia) and Marijana Vugdelija (International Medical Corps, Split, Croatia) have published the article “The Role of UNESCO Cultural Heritage and Cultural Sector in Tourism Development: The Case of EU Countries» in Sustainability, as part of the Special Issue “A European Perspective on Cultural Heritage as a Driver for Sustainable Development and Regional Resilience”. The paper estimates the impact of different cultural indicators on tourism development in 27 EU member states for the period 2008–2018, by using dynamic panel data. The results indicate that the number of UNESCO Heritage Sites do not have a significant influence on the number of tourism overnights, whereas there are significant positive effects on international tourism receipts and tourism employment. Moreover, the additional cultural sector specifics considered in the analysis; government expenditure on culture and employment in culture, showed to have a significant positive influence on all three tourism indicators used in the research. In addition, the research results indicate that the real GDP per capita and the level of human capital are significant drivers of tourism development.

This article is based on research conducted in the context of the SmartCulTour project that has received funding from the EU Horizon 2020 Research and Innovation Programme under grant agreement no. 870708.